Can we agree that fifty hours is a serious commitment for a piece of entertainment? Sure, it’s a fraction of the time it takes to master any real skill, and it’s probably a drop in the ocean of hours I’ve wasted neurotically flitting between social media apps on my phone. But time spent consuming media is defined by different parameters than how we choose to spend our days out in the real world. It’s time spent engaged with the work of another person; it’s how we learn to shift our perspectives and gain an abstracted understanding of empathy. Art, in its broadest interpretation, strips down life to highlight certain emotions, philosophies, perhaps even “truths.” As such, we subconsciously expect (or at least hope) that every moment of this craft will build toward one of these epiphanies, that the creator is assured enough to be leading toward, if not pure thematic consistency, something that constitutes “the point.”

I’m not discounting a longform work’s ability to convey message and theme, and perhaps that’s part of the reason Baldur’s Gate made me question the time I was spending on it in the first place. Again, fifty hours is not an insubstantial length of time, and plenty of bona fide masterpieces I’ve yet to touch would take up at least that. I’ve seen nary a second of The Sopranos or The Wire — the two television series that finally earned the medium true cultural respectability — in any true context. I have a beautiful box set of In Search for Lost Time — a novel that could not have my interests more piqued — on my bookshelf, untouched since I received it last Christmas. I’ve even heard of a game called Planescape: Torment — a Baldur’s Gate successor, rendered on the same engine — that supposedly has a literary ambition and authorial voice rarely seen in video games.

I think “[This] is totally worth your time, but [that] totally isn’t!” is a pretty hacky way to approach any subject in life. Not only does it totally and haughtily (and usually ignorantly!) invalidate that hobby/trade/object/etc.’s supporters, but it leads to cultural evaluation where the number of stars on a box is more important than actual, nuanced conversation about the object in question. So please don’t take it lightly when I ask, in future year 2013 and with a wealth of globe-spanning culture at my fingertips, what, exactly, am I supposed to gain from Baldur’s Gate‘s days-spanning runtime?

The most obvious answer is that epic-length titles help players build an affectionate relationship with an entirely fictionalized world. I saw it in the looks Baldur’s Gate acolytes gave me when I admitted the game didn’t grab me, a mix of reverent and glassy-eyed nostalgia. The game’s Sword Coast is a realm perhaps best served by literally getting lost in it, by scouring every inch of it in mere defiance of reality. I was a pre-adolescent when Baldur’s Gate hit PC gaming like a force of nature, and my friends who became obsessed with it buried themselves in it for afternoons and weekends at a time as a veritable fuck-you to homework, to bedtimes, to chores and responsibilities. The cynical side of me thinks long, padded games exist as they do solely to appeal to the bargain-hunter, a remnant of our game-obsessed youths when money was a rare enough commodity that one $59.99 title had to be enjoyed for as long as possible. While I don’t think that analysis is too off from the publisher’s — and often the consumer’s — perspective, the desire to extend a digital vacation from reality, while a foreign feeling to me, is doubtlessly the draw for many sword-and-sorcery nuts. 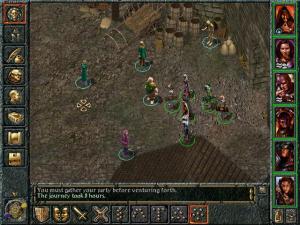 But is pure escapism reason enough to justify a massive undertaking like Baldur’s Gate, especially when its world, themes, and characters are so thoroughly boilerplate? Should an influential classic of a medium be limited in appeal to those with, 1.) such an insane amount of free time, and, 2.) a predilection for devouring pages upon pages of fantasy lore? And honestly, if you’re someone who fits that description, who am I to judge how you get your kicks? I’m not saying all games should be accessible, two-hour affairs my dad could pick up like Portal or Journey. Like all mediums, gaming certainly deserves its epics that appeal to those well-versed in the rules and constructs of the form. Baldur’s Gate was largely a phenomenon in its day because it provided a middle ground between games-as-ruleset games and games-as-narrative games, fusing them into a realized world with a story providing the (nearly optional) through line. While that seems like the recipe for a perfect game, what happens when the world’s governing rules are reverent to their origins (here, the 2nd Edition Advanced Dungeons & Dragons rule book) to the point of brittleness, when the story is spun more to fill a desired playthrough time than to explore its allegories and characters?

It takes a certain sort of mind to not just overlook but enjoy how deeply entrenched in the Dungeons & Dragons license Baldur’s Gate is. I think I can now safely say that I do not possess that sort of mind. Navigating the map with my molasses-footed party made every backtrack and journey a total hassle, and I do not chalk up my negativity toward its sluggishness entirely to my admitted impatience. And while organizing my group in strategic positions during a fight definitely taught me the spatial value of the isometric RPG, watching these impersonal sprites flail ever so slightly to a soundtrack of endlessly looped battle cries and catchphrases did not ignite my imagination nor excite me about pushing forward. Those party mechanics were another huge hang-up during my journey. Party-based RPGs work best, I think, when the player’s agency still focuses largely on a central figure and the rest of the cast fills in supporting roles. Helpful though it may be, swapping between so many different characters in Baldur’s Gate cheapened my relationship with my protagonist. Why bother devoting time to her when my other random adventurers are so much more adept at lock-picking and sword-swinging? Why is this even her story at all, when the tertiary players drive so much of the worthwhile action? 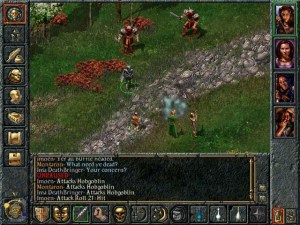 I’ve probably pieced together about twelve to fifteen hours of Baldur’s Gate over the past year. Unsurprisingly, the last few times I booted it up, I barely remembered where I was or what was going on. Something about a mysterious group assassinating my adoptive father and the kingdom’s iron supply becoming brittle and unusable (an admittedly ripe plot for a fantasy setting). I’ve talked to dozens of townspeople, fought men and beasts, and died several times. I have no doubt that the story grows in intrigue, that many of the game’s famed sidequests feature charming conceits and whimsical characters. But I’ve played it enough to understand its rhythms, its rules, and its tone, and I still can’t answer the question of if the journey is enlightening or — gasp! — simply entertaining enough to warrant the commitment, both of time and of thought put toward character sheets and items purchased. To put it bluntly, I still haven’t found a reason to care about Baldur’s Gate, beyond it being something to look at that does not exist in the real world.

Yet as something iconic of and unique to the gaming medium, doesn’t the epic role-playing game have something intrinsically valuable to say about how we interact with virtual spaces and stories? Would it not be somewhat tragic if these lumbering, rambling titans of games simply vanished, a fate that seemed almost assured before Baldur’s Gate gave them new life? Through its sheer vastness, Baldur’s Gate hints at moments of life something like a Valve title never could, be it the sweet pluck of a tavern bard’s lute after a long day’s journey or the sheer fear of being attacked, low on health and far away from the next town. What the still-green developers at Bioware chose to highlight about their world before the advent of full 3D graphics (in games of this scope, at least) is often marvelous; the sound design, most of all, is impeccable and lifelike. And, as I’ve mentioned in the past, leveling a character from easily defeated weakling to true warrior is a subtle emotional journey, usually more effective than the player even realizes. But I still imagine there are ways to improve this genre that later entries like the Elder Scrolls games still struggle with, ways we can bond with an interactive fantasy realm that aren’t so literal and rote. For as much “is it even a game” nonsense as it took upon release, I’d love to see the lessons of Ed Key and David Kanaga’s indie exploration game Proteus worked into a more traditional title like Baldur’s Gate. Give the world real mystery; link its secrets to a more emotionally visceral naturalism. And, perhaps most importantly, lead every element and tangent back to the larger statement. 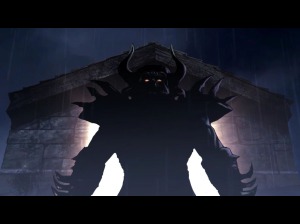 I should note that, despite my misgivings, I will probably give Baldur’s Gate another shot someday, especially if someone can convince me soldiering onward is worth it. I will certainly check out Baldur’s Gate II, which many friends assure me is superior and solves several of my issues with the first one (even while somehow increasing the length!). I do not like leaving things incomplete, which I think is a major qualifier for liking video games.

What Do You Think? Cancel reply