About a month ago, I asked my Twitter followers to pick a Nintendo Virtual Console game I should play and write up for my blog. Blogger Pixel Bubble was the first to respond, and chose Kirby Super Star. You can read Pixel Bubble’s thoughts on the games and the games industry on the Pixel Bubble blog, Geek Force Network, United We Game, and Twitter.

Kirby Super Star is not so much a collection of minigames as it is a collection of mutations. Masahiro Sakurai, at once the most eccentric and restrained of Nintendo’s ’90s game designers, never strays far from his core idea of how a Kirby game should play. Sure, Super Star offers two (very tertiary) timing-based challenges, but the main package swaps out Kirby’s objective while keeping his controls stable and recognizable. Even in his furthest flights of fancy, Sakurai stays true to Kirby mechanically as well as spiritually, a unique decision when compared to other genre-hopping mascots of the time. When Mario wanted to race, he took to the track in a go-kart. Kirby races as he does all things: Walking on a 2D plane, inhaling obstacles and enemies, and chowing down on loads of pastel sweets.

END_OF_DOCUMENT_TOKEN_TO_BE_REPLACED

What I Want from the New Console Generation

The reign of the launch-day killer app is over.

The launch line-ups for the Playstation 4 and Xbox One, both due out by month’s end in North America, include no game-changers, no Halos or Mario 64s. New consoles are now sold more on the promise of innovation and multimedia integration than they are on a single game any self-respecting manchild simply must own by Christmas Day. Perhaps that’s for the best, the thrill of the console launch replaced with appreciation for the medium’s continual evolution. Yet here we are, weeks away from newer, more powerful gaming devices, and I’m still not sure what gamemakers hope to achieve with them beyond making things bigger and shinier. Perhaps we’re at the point where games are a robust and diverse enough medium that console generations are no longer indicative of their evolution. Perhaps AAA developers just didn’t have an innovative way to shoot people in the face ready for launch day. Whatever the case, new tech and rapidly changing distribution methods will undoubtedly alter the games industry; here are a handful of ways I think those changes could be for the better.

END_OF_DOCUMENT_TOKEN_TO_BE_REPLACED

Gamers tend to forget that Nintendo is just as much in the children’s entertainment business as it is in the video game business. It’s a mistake that generates much of the frustration lobbied at the company’s unwillingness to evolve its key franchises; suddenly, the grand innovators who shepherded the industry through its infancy and adolescence often come off as… well, infantile or adolescent. I’m not making excuses for this perceived laziness, because I would love to see a new, envelope-pushing Zelda that truly strayed from the hand-holding, old-hat Ocarina-isms of Twilight Princess and Skyward Sword. But the fact of the matter is, those titles are, if nothing else, surely as satisfying for the current eight-to-twelve year-old set as Ocarina of Time and Majora’s Mask were for me, and as the original 1987 title was for the generation who later scoffed at the linearity of the Nintendo 64 games. What I’m saying is, even if they’re no longer the industry leaders when it comes to innovating game design, you can’t say Nintendo doesn’t know its audience. And, despite what you might think from looking at any internet comments section (the stomping ground of the vitriol-filled twenty-something gamer), Nintendo’s primary audience is — and really, always has been — children. END_OF_DOCUMENT_TOKEN_TO_BE_REPLACED 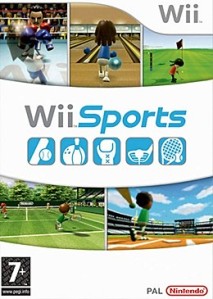 In celebration (or at least dutiful acknowledgement) of the Wii U’s release, a look back at Nintendo’s bland, blindingly obvious killer app you can’t help but love.

Wii Sports is important. You’ve heard it before, and you’re sure to hear it again as people slowly peer into the dual screens of Nintendo’s new Wii U console, incredulously checking if the game masters can bottle such lightning twice in a row. (Early reviews answer with a definitive “maybe.”) Yes, it’s important in the way Angry Birds and The Sims and even that gilded palace of game design sin, Farmville, are important, in that six o’clock news report sense that aunts and little sisters and drab co-workers are finally coming around on this whole “video game” thing. (Despite advertising to the contrary, I still can’t picture little old ladies enjoying a rousing round of virtual boxing. If anyone has video evidence to the contrary, please feel free to share.) But that’s only one story, usually tinged with the resentment of having to let in the “norms” or conversely chanted in a Freaks-like chorus of “one of us” now that “games are for everyone.” Both responses marginalize the medium, bullying it into some weird niche instead of allowing people to decide for themselves what they want out of video games.

Nintendo made it easy to take one sideways glance at Wii Sports and declare, “sell-out.” The game’s aesthetic isn’t just boring; it’s non-existent, perhaps one of the ugliest titles ever put out by a major developer and especially shameful for the powerhouse behind such an astronomical percentage of gaming iconography. Its limp pastels and barely decorated locales don’t even jive with the comforting banality of the Wii’s future-chic menus and general style, where the twinkling ambient soundtrack and too-bright whites convey what I imagine in 2006 felt like taking Oxycontin at an Apple Genius Bar that also serves Pinkberry. END_OF_DOCUMENT_TOKEN_TO_BE_REPLACED

The “genre mash-up” label is usually not a harbinger of artistic integrity. At their most transparent and desperate (think Cowboys and Aliens or Pride & Prejudice and Zombies), these crossovers reek of the worst commercial instincts, peddling a glib, digestible conceit over story and passion. They’re the sort of high-concept, pitch-friendly ideas that sound clever in passing but less so with every future mention, the shining allure of the “it’s like [blank] meets [blank]!” tagline – of familiar things made semi-new – slowly collapsing in on its own hollowness. In video games, no genre has suffered more indecencies at the hands of this Frankenstein-like graft treatment than the role-playing game. Nearly every other type of game has had the basic hallmarks of the RPG sutured onto it like a disproportionate fifth limb, as if skill leveling and weapon modification alone could transform any kart racer or hallway shoot-’em-up into something complex and heady. A handful of games incorporate these mechanics into their potpourris as easily as Quentin Tarantino can splice together the aesthetics of trash and art cinema, but more often than not, “contains RPG elements” is a kinder shorthand for “features extraneous bells and whistles to make this experience feel more involved than it actually is.” END_OF_DOCUMENT_TOKEN_TO_BE_REPLACED