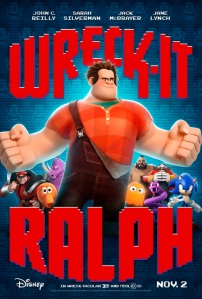 This is the first of two film-related blogs I plan on writing over the next few weeks. This is a straightforward review of Wreck-It Ralph; the second will be a little more esoteric.

Disney’s Beauty and the Beast is the first film I remember seeing in theaters. “Remember” might be too strong a term, though; I had just turned four, so “retain a hazy, dreamlike vision of colors and music informed by subsequent viewings” might be more accurate. Still, I’m positive I was quite taken with it, as we all were (and are) taken with Disney’s squashy, stretchy hyper-realities, these simple fables that are less movies than canvases for the ceaseless imagination of youth. (I’m still close enough to those years to remember that when your kid wants to watch The Lion King VHS for the twentieth time, it’s less about the story told on-screen and more about the world of possibility it illuminates.)

Still, even at the tender age of four, there was a moment in the film that struck me as totally inauthentic. It’s near the story’s endgame, when vain, buffoonish Gaston decides to get the heroine Belle’s father locked in an insane asylum unless she agrees to marry him. He explains this plan to the asylum’s owner, a decrepit old man who couldn’t scream “shriveled up incarnation of pure humbug evil” more if the animators actually just rotoscoped in one of the skeletons from Jason and the Argonauts. His response to Gaston? “Oh, that is despicable. I love it!”

Again, I was four years old watching this. I was not far removed from mastering the use of a toilet, and the thought of Santa Claus being a phony probably hadn’t yet crossed my mind. But the fact that this guy, this literal cartoon, was completely aware he was the “villain” of the film sat completely wrong with me. END_OF_DOCUMENT_TOKEN_TO_BE_REPLACED